Today, my review is based on one of the most frequently seen cars on SL roads; Toyota Axio Hybrid. Since the car was first introduced in 2012 only as a gasoline variant continuing the 1NZ-FE engine, the Hybrid variant was introduced in 2013. So most people went for the hybrid variant instead of going for the gasoline variant. The the car received a minor facelift in 2015 together with the addition of the Toyota Safety Sense C (link about Safety Sense C- https://www.toyota.com/content/ebrochure/CFA_TSS_C.pdf). From the introduction, the car still remains as one of the most imported cars to SL. Here in this review I'm going to focus mainly on the driving dynamics and build quality.

First of all, the looks. Yeah I know that it is not a head turner at all, but I really don't like the exterior look of the pre facelift variant (apologizing from all the owners

). The facelifted version looks much better IMO but that is totally based on my personal opinion. Here my review is based on a 2014 Hybrid G variant. So I'll start with the topics. 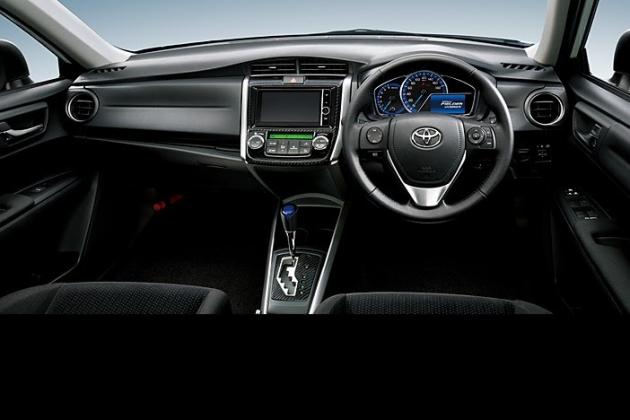 We all know that most people were let down by the interior quality of the 2007-2011 Axio NZE141, due to really cheap and plasticy looking bits and pieces. So the newer version seems nice at the first glance. I really like the soft padding on the door panels and on the passenger side of the dashboard. When you close the door, you'll feel a bit of solidity. Design wise, 161 interior is better than the 141 in almost all the aspects except for the area where the gear shifter is located. On the 141 model the dashboard continues towards the front armrest as a one piece, but on the 161 it looks kind of seperated. This creates an empty space around the gear shitfter, giving the impression of a much more cheaper car.

Watch closer and you'll notice the cost cutting effects which took place around the cabin. First one is the hard plastic dashboard top. On the previous 141 generation, the dashboard top panel was finished with a soft touch material. On the G grades, same material was continued on the upper parts of the door panels (dark grey part). But on the 161 Toyota have gone with the cheaper hard plastics. But they would not bring out the dashboard cracking issues which were existed on the 2007-2008 models.

Main competitor of the Axio Hybrid, Honda Grace have a much more exciting interior with tons of silver insertings and colourful lighting in the dash. Compared to Grace, Axio's interior looks kind of bland for me, but the feels that it is a bit solid than the Grace.

Seating is a bit improved from the 141. You'll get more side support on the front seats and seats are a bit softer (maybe due to the velvet like covers used). Front seating positions are okay and are mainly catered for a comfortable ride than a sporty ride. This car has a good rear seating position for tall passengers. On the Allion/ Premio thigh support is insufficient on the back seats due to lower positioned bench. But on the Axio Hybrid, thigh support is really good for tall passengers. Again you'll notice a cost cutting attempt on the back seats. Fixed headrest. Shame on you Toyota. You'll only get adjustable headrests in the Luxel variant, but there are only a few and those are gasoline versions. Leg space is okay and a bit better than the 141, but lacks when compared to Grace. Still most people would find the interior space is adequate.

Almost equal to 141, but lesser than the Grace. You'll find Stability control and Electronic brake force distribution which was only available in the Luxel of the 141. Also you'll get nanoe (generates ions with water particles to reduce skin drying out when using the AC). From 2015 facelift, safety features became standard throughout all the grades. But thw two front tweeters came with the G limited and above variants of the 141 were absent. Actually there is nothing more to say about the options, so let's move on to discuss how it drives.

Once you sit on an Axio Hybrid you'll have to totally forget that you are in a driver's car. I mean "TOTALLY". Even from the earlier days most Toyotas are not famous for sportier rides, but there was a very little amount of enjoyment left. VERY LITTLE. But here, it is NONE. Even boring cars like Allions, Premios, 141s, Aquas, Prius and suprisingly the gasoline variant of the 161 Hybrid  feels much more engaging to drive than the Hybrid Axio (But still miles behind other cars like Mazda Axela). I drove it on a twisty road and I got ZERO feedback from the steering. No weight. Numb. You can't predict how the tires would react to your input given through the steering. I almost met with an accident when I took a bend after speeding a bit on a straight road, because I was unable to predict how the car would react to the steering input given by me. The problem is when you drive the car at higher speeds you cannot predict the amount you'll need to turn the steering wheel to take the bend. Even the boat like Allions and Premios have a little weight to the steering which would help you a bit in this kind of occasions. Aqua shares the same powertrain with the Axio hybrid, but feels more nimble and sharper to drive. But this issue is less pronounced when you drive the car slowly. It is dead easy to drive and maneuver around the town due to this lightness.

But on corners, the car has plenty of grip than the previous generation. I experienced a noticeable reduction in body roll when compared it with the 141 Axio. Also when you do over 100kmph the car feels well planted on the road than the previous gen ( 141 Axio felt like the car is flying, when the speed is over 120kmph). I remember that Toyota had repeatedly mentioned on their japanese site that the high speed stability was enhanced, at the time when the new model was first introduced.

Then the acceleration. On speeds below 50-60kmph it has adequate torque. The motor gives sudden bursts of torque on demand, so it's easy in traffic and low speeds. When you put your foot down, for a brief period you'll really feel the assistance of the motor, but then it slowly fades away around 50-60kmph. For me it does not feel as fast as the 141 Axio ( Let's not compare it with the the Honda's equipped with i-DCD Hybrid System

). The car weighs about 1150kg with 110 combined horsepower, but the 1310kg weighing Civic FD3 feels much more livelier and responsive even though it has the same amount of combined horsepower. Again, for day to day driving the powertrain is more than adequate.

I know most of you feel disappointed about the driving dynamics about this car at this moment. But you should not forget that it's a Toyota's entry level hybrid. It serves all the purposes which it was intended to fulfill. A major plus point that you can experience in this car is the fuel economy. In freely moving traffic it gives around 15-17kmpl. Long distances would help to squeeze out around 25kmpl. I don't have much knowledge or details about the fuel economy levels, but I would be glad if owners can post the figures as comments.

Then the smoothness. When compared to Honda's hybrid systems ; specially the i-DCD Hybrid systems in Fit, Vezel and Grace, the Axio Hybrid is silky smooth. The integration of the engine and the motor is seamless. You won't notice a single sign while the car changing from the motor to the engine, except for the slight engine whirling sound. As I mentioned earlier in this forum, there is a bit of as issue with the Honda i-DCD Hybrid system at the beginning of a steep hill. It feels like the gearbox is confused to choose the correct gear. You won't experience that in the Toyota. It just goes. The powertrain of the Toyota Hybrid system feels polished than the Honda's.

Another benefit is the comfort level and refinement. The car is comfortable over bumps than the Honda's due to the softer suspension setup, but not as good as an Allion or a Premio. It's on par with the previous gen IMO. Road noise levels are also low and the hybrid system helps to eliminate the engine noise during lower speeds. I notice a huge difference in comfort and refinement levels in the Honda Grace when compared to the Axio Hybrid. Grace is bumpy and the suspension feels busy over bumps. Harder seats worsen it further. So for doing long distances Axio Hybrid is the best option due to the fuel economy and refinement levels. What we should not forget is that the purposes it was built for and those are economy and easy drive.

Since I drove the car for a brief period, I cannot comment much about the reliability. The owner of the car (a close friend), I've driven bought it in 2014 as a Zero mileage unit and still owns it without an issue. Now the car has done around 60,000kms. I've heard about premature battery failure, but haven't met an owner who had to experience it. But there is a possibility for that due to the fact that it shares the same powertrain with the Aqua, which is famous for the same issue. Other than that, haven't heard about any complaints.

At the end, all I have to say is that the Axio Hybrid would satisfy you if you expect what it can deliver at its best. Don't look for it expecting handling levels that would put a smile on your face. The issue of the steering wheel can only risky when you push the car to its limits, but if not, that is perfectly tolerable for a typical SL driver. I'd name it as a car which is perfectly suited for the typical SL driver.

At the end I have to say that this review is based on none other than my personal experiences. Feel free to highlight the flaws and mistakes, as it would be helpful for my next review.

Thank You for reading.

For details about grades and variations, you can visit the links below